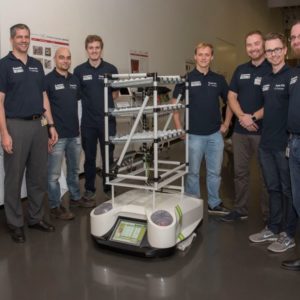 Developing an intelligent automated guided vehicle with an RFID system

In cooperation with Magna Steyr AG & Co KG, the Degree Programmes in Automation Technology at CAMPUS 02 have conducted a project with the aim to investigate a number of subfunctions of an automatic C-parts management system.

In C-parts management, intelligent vehicles play an important role in optimising the supply of parts on any production line where they can be used to transport items and during assembly activities, even accompany workers and automatically swap positions with them. To ensure safe human-machine interaction and so that intelligent vehicles can successfully fulfil tasks, it is necessary that they have intelligent control functions and are coupled with the entire system.

Using a fully implemented demonstrator, the Degree Programmes show how to automate the supply of the production line with C-parts (bulk materials, such as screws and nuts). The beginning of the project encompassed the design of an automated guided vehicle (AGV) with different load capacities. The concept included an energy-efficient motor incl. steering control and battery management, navigation via AR tags (augmented reality) and AGV control via an app for Android smartphones.

The project also included the development of an intelligent, wireless re-ordering system. By pressing a key, information on an order can be sent to a superordinate system via WLAN. To help the AGV identify different containers, an identification system that uses RFID (radio frequency identification) is being developed. With this identification system, the AGV should also be able to decide whether a container is full or empty when replacing them and as a result, should be able to re-order automatically.

The prototypes that were developed in the course of the project serve to test the supply procedure using AGVs and examine the technology’s acceptance and usability in different areas of automotive production. The testing of the demonstrators yielded many valuable results regarding both individual systems, such as the motor or container RFID, and the entire system’s integration into the existing IT and production infrastructure. These findings form the basis for the improvement of components and, in parallel, the development of new applications, such as increasing load capacities to transport larger parts of a vehicle.

There is potential for further successful projects in this field and we are happy to announce that research is being continued as part of another cooperative project.