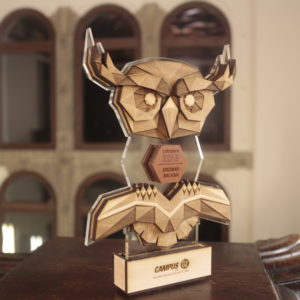 The topic of the first CAMPUS 02 Teaching Award 2016 was “Using modern technologies in a meaningful way – improving learning results”. It went to Ms Dagmar Archan for her course unit “Technical English I” and was celebrated during the festivities of CAMPUS 02’s 20th anniversary.

During the kick-off event in October 2015, the teaching award was presented. In addition, Mr Peter Baumgartner, university professor and expert for technology-based learning at the Danube University Krems, Austria, gave an introductory speech on the teaching award’s motto.

In sum, seven course units from five different degree programmes were nominated and evaluated by the jury supported by external expert Mr Michael Kopp (Head of Academy of New Media and Knowledge Transfer at the University of Graz).